February Album of the Month

Metamorphosis – a process by which a rising band develops and hatches, involving a dynamic and relatively abrupt change. Such has been the DeadBlondeStars (no gaps) story. Following early EPs, ‘Resolution’ (2015) and ‘Keepsake’ (2018), the hopes and plans for the debut album of 2020 were knocked sideways by the arrival of Covid and then the hacking of their Facebook page meant they had to start all over again on socials at precisely the wrong time.

But despite these setbacks, the lockdown era proved to be a time of evolution and growth for the band. A nonchalant play for ‘Jesus Fly’ on my Friday rockshow, started a listener-powered snowball for the band, resulting in the band having a two-year residency on the rockshow playlist. Their lockdown sets for our two online festivals showed a new side to the band and at Wildfire Festival last summer they turned many people’s heads as an immensely powerful and tight live band. They finished 2022 following the footsteps of the likes of Amongst Liars, Those Damn Crows, Massive Wagons and Scarlet Rebels being voted GMS ‘Band of the Year,’ drawing a massive vote from music fans across the UK and abroad. The best kept secret in modern rock? 2023 may be the year the gatekeepers catch up although, in truth, to a whole swathe of music-buying fans DeadBlondeStars were ‘added to favourites’ a long time ago.

This new album is a powerhouse – the definition of hard rock for a modern age, with a brooding darkness, raw menace and tension that fits the troubled times we live in.

Like CovAid 2020s ‘Desolate Days’ – a song that captured how it felt to live through the first Covid lockdown – so the new DeadBlondeStars album has a mood that reflects the times in which it was recorded. The songs aren’t about Covid specifically, or the raft of tensions that have shaped the world since, but there is a dark cloud that hangs over these recordings – and as music should be, intentionally or not, these songs are a powerful product of their time.

For listeners of the Friday rockshow, ‘Metamorphosis’ comprises of three songs that have already become firm listener favourites. ‘Shine Any Light’ didn’t make the last album but makes the cut second time round. A track premiered during our Modern Rock Wellbeing Festival way back in August 2020, this is a song that never left the Friday playlist, garnering requests through the seasons and last year it returned as a standout track on Modern Rock Vol 4. Also appearing on the new album are ‘Tiny Giants’ and ‘A Friend Like You,’ two songs which have each had 4-5 week runs, powered by listener requests. There’s no such thing as hit singles in rock anymore, but for those aware of the band, there are three fan favourites already on the new album, and the presence of proven favourites always helps a new album to land well.

The new album opens with ‘11 Teeth’ and it is clear from this opening track that this is a darker more intense album than the self-titled debut of 2020. With the opening songs, vocal comparisons to the legend Chris Cornell immediately spring to mind, such strong and distinctive vocal performances from Gary, brooding during the verses and soaring range during the choruses. Along with ‘This Tree’ and ‘Worlds Apart’ the opening trilogy of tracks establish the mood for the whole album. Musically the power and intensity of the guitars have evolved from the debut album, the band’s new drummer Jamie has segues where he adds a new percussive dimension to the songs and the bass playing from Matt also has moments to shine – particularly on ‘I Called Whilst You Were Out.’

My standouts from the new album are ‘Alaska’ and ‘Hernan.’ ‘Alaska’ was one of two tracks that grabbed me on my first listen to the album – and it takes you on a real musical journey. The marching, industrialised guitar riffs immediately arrest as the song builds well. Here is powerful music that touches something primal – it’s proper hard rock in the true and full sense of the word, a real opus track. Hernan also I think might become a new listener favourite on Friday nights, as longstanding Friday staple ‘Jesus Fly’ faces a period of semi-retirement.

The emotive depth of many of the album tracks lends the music a cinematic quality and I reflect that some of this music would work will as film music. Dark ones of course, I’m not thinking Rom-Coms here.

Picking the one album to review for February was incredibly hard. There are so many strong album releases out which merit attention. What stood the DeadBlondeStars release out was it was so individual and uncompromising in its approach and muscular in its musical identity. The rising rock scene isn’t new anymore and I sometimes feel that, as bands evolve, too much attention can sometimes go on imaging or softening sounds to appeal to the safe tastebuds of the big music media and platforms. Not with DeadBlondeStars: Proudly or belligerently, they are making the music they want to make. Yes, there’s a nod to Pearl Jam and the band’s love of grunge, but the band’s sound is their own. There are moments of experimentation with arrangement and atonal flourishes too – that at times challenged me – but the point of art is the full commitment to self-expression. The band has parted ways with its old label and has made and released the album they want to make – and on their own terms. It is a demanding album and won’t be for everyone, but rock needs more bands like DeadBlondeStars that are in it purely for the music and, whose sense of evolution – or metamorphosis – is defined by their creative journey as musicians.

I have never been a grunge man myself, or naturally a heavy-heavy rock kinda guy. But I respect what it’s about and, like any genre of music, one has to take one’s hat off when it’s done well. This album isn’t a collection of toe-tapping ditties to enjoy whilst driving to the supermarket, but if you want an album with deep intensity, one that challenges you and pushes boundaries, DeadBlondeStars are releasing your essential purchase of February 2023.

‘Metamorphosis’ is released on 3rd February

As Album of the Month, tracks will be featured during every Friday rockshow for the month ahead. 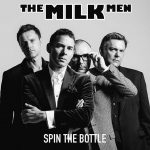